I can help you set up a holding structure

I’m Andreas. For over seven years I have been advising businesses on how to do business in Germany. I’d be happy to call you and answer any questions about setting up your business in a founder friendly way.

Until recently, it was nearly impossible to take advantage of the ingenious concept of a holding structure when founding a business, especially for SMEs. The costs of establishing a holding structure with two or more business were, for the most part, unnecessarily high. In addition, no entrepreneur wanted to set up two GmbHs requiring €25,000 in share capital each.

But ever since Limited Companies conquered the German market between 2003 and 2006 and led to the appearance of the limited liability UG – a German alternative to the UK form Ltd. on 1 November 2008 (Bundesgesetzblatt 2008, Part I, No. 48, p. 2026), the use of holdings structures is no longer reserved for large corporations.

When it comes to internet start-ups or tech companies where multiple founders have joined together, the shares of the subsidiary held often equal 10 to 50 percent. This results from the founders/shareholders forming their own holding companies that hold shares in the operating company

A holding structure is not a legal company form, but a description of the organisation of multiple companies. The structures are often termed differently according to their application.

Large companies are typically organised in an operational holding structure. The holding company itself is the largest operating company in the entire structure. Subsidiaries are strongly influenced by the parent company and are usually regional or overseas branches.

Management holding companies incorporate central management functions with the authority to make decisions that apply to all subsidiaries. Those management functions often include strategic direction, the filling of leadership positions and the controlling of capital flow within the group. The structure’s management holding company is usually headquartered in countries with attractive taxation systems, optimising the entire corporation’s tax payments.

The parent company in a financial holding structure exists solely to manage the structure’s assets, not to perform management functions. At most, the holding company might set financial targets for its subsidiaries. It often acts as the corporation’s bank as well, providing capital to its subsidiaries.

An organisational holding structure mainly serves as a tool for internal organisation. By separating business units as independent subsidiaries, a company can maintain a comprehensive overview of its individual divisions.

The fifth type of structure has recently emerged in which the holding company acts only as a shareholder of the operating subsidiaries – a structure often used by SMEs. By employing such a structure, entrepreneurs benefit from the tax advantages of a holding structure without incurring unnecessary administrative expenses.

Want to turn your business dreams into reality?
We can guide you through every step of the holding formation process

1.3. Tax advantages of a holding structure – Profit transfer and disposals

Holding structures offer entrepreneurs many possible tax scenarios. When a subsidiary is disposed of, for example, 95 per cent of the disposal remains untaxed, according to current legislation. Only the last five per cent is assessed and taxed according to the usual regulations (approx. 30 per cent), meaning that only 1.5 per cent of the disposal is paid as tax (§ 8 para. 1 KStG).

For these regulations to apply, the holding company must hold at least ten per cent of the subsidiary to avoid paying corporation tax and at least 15 per cent to avoid paying trade tax (§ 9 para. 2a GewStG). The funds now contained within the holding company can be reinvested in a new or existing subsidiary or paid out to its shareholders, who can take advantage of certain tax allowances (Freibeträge). The fact that the total profit made from the disposal is taxed at only 1.5 per cent makes holding structures a must if you plan to sell your company in the coming years.

1.4. Splitting up a company for increased asset protection

Holding companies are not liable for their subsidiaries. Profits can, therefore, remain within the holding company to be used as needed. If they remain unused, they will be at risk if a liability case arises. A business can effectively protect a portion of its assets with a holding structure. Take a look at point 2.4 for a more detailed discussion of turnover tax entities in regard to liability.

Some corporations find it beneficial when it is difficult for external parties to discern who is behind individual companies. When utilising a trust agreement, a representative (usually a lawyer) can serve as intermediaries.

Doing so frees a business from having to disclose information about the company’s owner when fulfilling its disclosure obligations. This prevents competitors as well as the company’s own vendors from being able to form a picture of the business or structure as a whole. Only the relevant authorities (the tax office, for example) must be informed of the trusteeship, but practices such as competition limitation agreements usually cannot be avoided (Silberberger/ Schwendemann 2007, p. 97).

Trusteeships allow entrepreneurs to keep the external perceptions of their individual companies separate. One company can be known for quality products at low prices, for example, while the second specialises in premium products without being restricted by the first company’s image.

2. Splitting up a company

2.1. Splitting up a company

Many companies are often active in several, often entirely different business areas, with each area presenting its own risks and opportunities. If a liability case arises within one business division, all other divisions are affected, as the company is liable as a whole. However, entrepreneurs have the ability to separate their companies’ individual business divisions. If they do so in the form of corporations such as UGs, they protect not only their private assets from liability cases but the rest of their businesses as well. 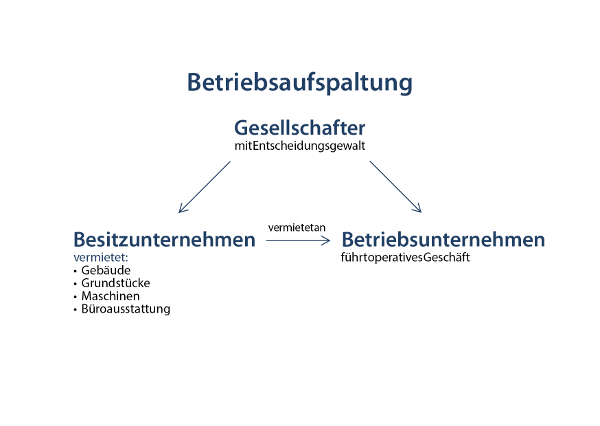 The disadvantages of split-ups include:

In addition to protecting the other divisions of a business, splitting up a company can also protect its physical assets if a liability case arises as well. The operating company can rent plant and equipment from a second company, which no longer puts the plant and equipment at risk in case of a liability claim as they no longer belong to the liable company. Only the tax office (Finanzamt) can take action against such an arrangement. The assets are protected against all other external parties (§ 74 AO).

2.3. Splitting up a company: Preconditions

Such a split can only take place when a company transfers fundamental components of operation to another, with both companies led by one person or multiple people together. There must be some sort of interdependency regarding objectives and personnel, otherwise, the separation cannot be legally considered a company split-up. The company that holds ownership of the plant and equipment is designated as the leasing company (Besitzunternehmen), and the other as the operating company (Betriebsunternehmen) (Silberberger/Schwendemann 2007, p. 94).

The leasing company also holds shares in the operating company, meaning that dividends are taxed according to the legal company form. However, the income of the holding company is usually offset by expenses for the purchase of the equipment. Entrepreneurs, therefore, have different organisational possibilities for financial optimisation.

Profit distributions from the leasing company are subject to either corporate tax or income tax, depending on the legal form (sole proprietorship, UG/GmbH, etc.).

When it comes to individual cases, is important to clarify whether or not the entity can be considered a consolidated tax group for VAT purposes (umsatzsteuerliche Organschaft). If this is the case, the operating company is considered as integrated into the leasing company. The leasing company must, therefore, submit advance turnover tax returns, annual turnover tax returns and possibly others. In a case such as this, the intended limitation of liability becomes irrelevant.

The Wiesbaden Model (Wiesbadener Modell) refers to a type of split-up in which one entrepreneur assumes ownership of the leasing company, and his or her spouse assumes the ownership of the operational base. In such a case, the law assumes that there is no personal interdependency, allowing the spouse to earn income by leasing the operational base (BFH 30 July 1985, BStBl. 1986 II p. 359).

It should be noted that the spouse may not be able to take on insurable employment in the operating company. It is recommended to have the German Pension Insurance Fund (Deutsche Rentenversicherung) clarify the spouse’s status in this case.

The most important types of German taxes that entrepreneurs should know about:

NB. The above articles are in German

Forming your own UG quickly and easily: For many, self-employment is a dream that is often bound to a wish for one’s own company. Since UGs came about, practically anyone can form a limited-liability company without having to put forward a large amount of start-up capital.

A UG can be formed with €1 in share capital, is exempt from much bureaucratic red tape and can be implemented in a holding structure.

Three young founders have dived into entrepreneurship doing exactly that, with the help of firma.de. They gave us some insight into why they did what they did below.

firma.de: Why did you choose a holding structure to organise your business?

For us, the ability to utilise individual holding UGs as intermediaries (between the operating UG and us as private persons) to optimise our profits for tax purposes is especially interesting.

In practice, this makes it possible to include the dividend payments from the operating UG in the holding UGs of the shareholders, effectively paying only 1.5 per cent tax.

Beyond that, holding structures are perfect for entrepreneurs wanting to sell shares. The resulting profits can be transferred to the holding UG without paying almost any tax (approx. 1.5 per cent) and invested in other companies.

Are you looking for expert support that won’t cost a fortune?
Let us handle all the German red tape for you.

“Working with holding structures make it fun to be an entrepreneur,” says Oliver Flaskämper, serial founder from Herford (content.de, nettolohn.de, bitcoin.de, adbutler.de, semigator.de). Flaskämper has been managing his operating companies as separate subsidiaries (such as content.de AG or Bitcoin Deutschland GmbH, for example) within a holding structure (Priority AG) for 10 years.

Dividend payments from his operating companies or proceeds from sale shares to subsidiaries remain within his holding company until he invests them in new or existing shares.

If you would rather optimise your profits for tax purposes and invest them in new or existing companies than pay them out in dividends, then a holding structure is the way to go.

Holding structures: An insider tip for selling a company

What would I be able to keep if I sold my company today?

Here are the taxes you’ll pay:

You can decide for yourself when the withdrawal should take place and in what amount. Alternatively, you can decide to invest in or purchase shares in other companies. Distributions from the parent company to its shareholders that take part later (and privately) are subject to respective settlement taxes (Abgeltungssteuer).

Calculations carried out by firma.de partner and tax adviser Stephan Brockhoff (firma.de assumes no liability for the accuracy of this information).

The information published on our site is all written and checked by experts with the greatest care. Nevertheless, we cannot guarantee the accuracy of this information, as laws and regulations are subject to constant change. Therefore, always consult an expert in a specific case – we would be happy to connect you with the right professional.

firma.de assumes no liability for damages caused by errors in the texts. 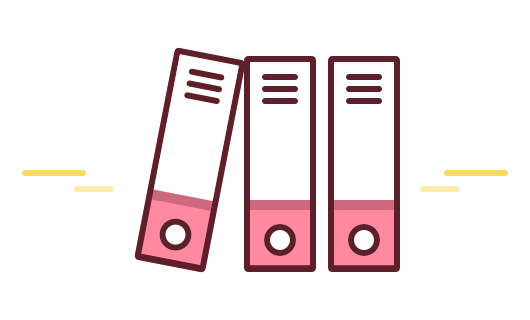