Here you can find out what the fake documents look like and how you can avoid being ripped off.

Here’s how the scam works

New entries in the commercial register (Handelsregister) have been published on the Internet since 2009, which has made it exponentially easier for scammers to know when and where they have to send their counterfeit invoices.

The fraud always follows the same formula: A few days after the entry in the Handelsregister, the company founder receives a letter which is supposed to give the impression that it’s been issued by the tax office (Finanzamt). The founder is then directed to pay an amount between € 300 and € 1,200 for their entry in the commercial register. The payment period is usually between three and seven working days. Failure to pay in a timely manner would incur further costs for the founder.

Very similar to the original

The fake letter can hardly be distinguished from an official letter. The following characteristics are used to make the fake seem similar to the official letter:

Often, the fraudulent letter even arrives before the official invoice from the district court in the hope that entrepreneurs will transfer the amount in anticipation of an official invoice without looking at it too closely. 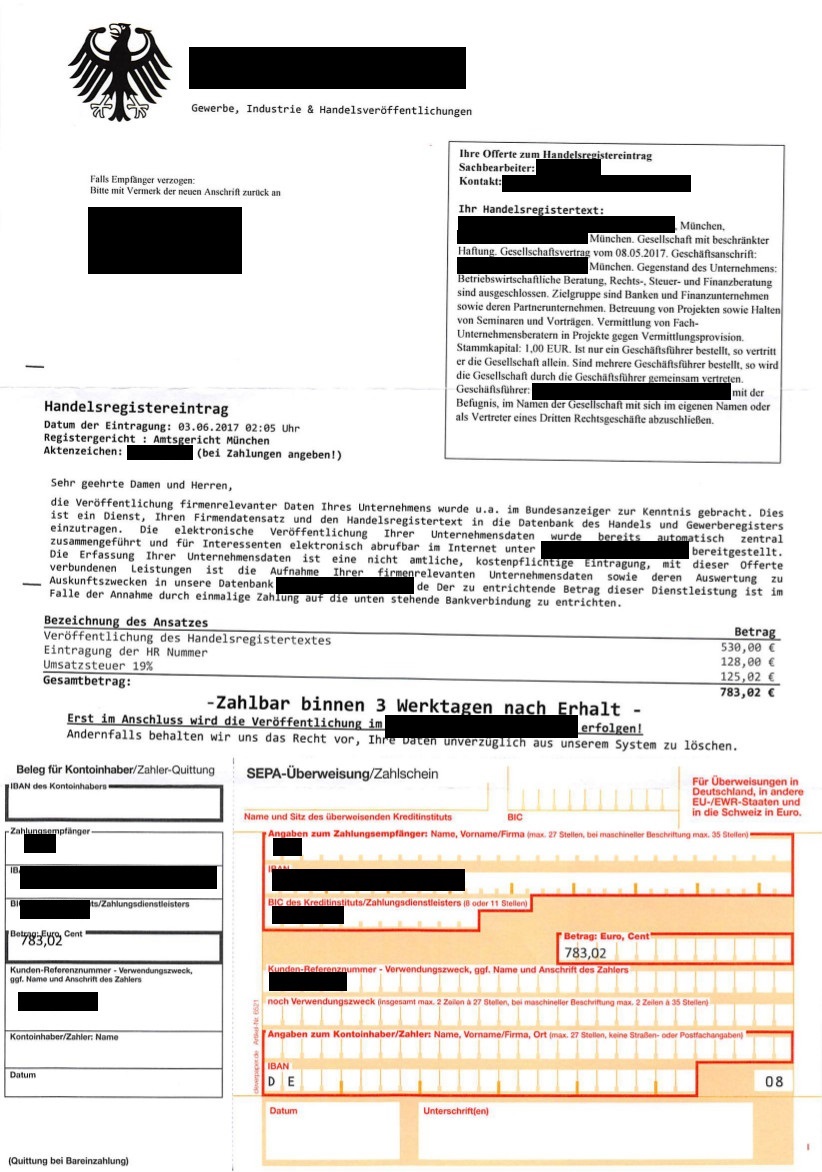 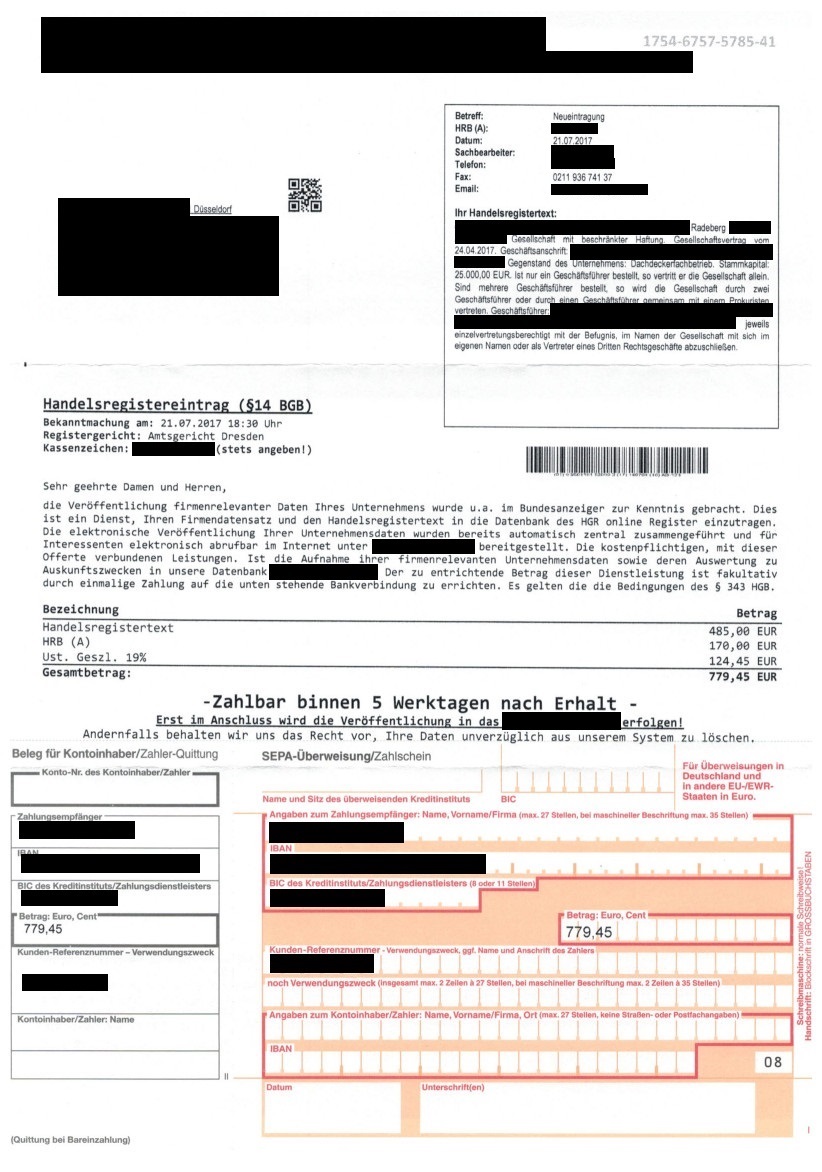 Unfortunately, we cannot name the names of companies that send these letters for legal reasons. The above examples should nevertheless illustrate how most of these calculations are constructed and which tricks make the author seem like an official institution.

Pay attention to the fine print!

The problem with fraud is that it’s not clearly defined as illegal in Germany. If the founder transfers the significantly higher amount compared to the official invoice (the fees for that are around € 150), he or she will be entered in an online database. However, this has no use. Only the fine print indicates that the entry is a business register or a paid business directory and not the official commercial register. Over 100,000 people have already become victims of the scammers. It’s believed that the amount of damage is in the tens of millions.

How should I proceed if I receive such a letter?

Call the local district court. There you will find information about whether an invoice is genuine or if it’s a fraud. If you are unsure, call us – we’ll be happy to help.

Are you unsure about whether an invoice you’ve received is legitimate?
You can reach our service team in the firma.de chat, by e-mail at service@firma.de or by calling +49 611/17 207 0.

What should I do if I’ve already sent the money?

Although the Federal Court of Justice (Bundesgerichtshof) has identified many of the counterfeit invoices as fraud and willful deceit, it’s difficult to combat.

In principle, even after the money is transferred, the contract can be challenged. For this, you should contact a lawyer or the Association against Economic Crime (Schutzverband gegen Wirtschaftskriminalität). But worst case scenario, the money is lost. So do be careful!

Incidentally, scammers are not afraid to make repeated attempts at fraud with other fake invoices. Even when registering with the Patent and Trademark Office (Patent- und Markenamt), a fee is charged. They use this and also send fake requests for payment in the same way.

If you receive one of these letters or something similar, it’s important not to transfer the money right away. Call the office and ask if the invoice is real. If not, report the fraud directly to the Association against Economic Crime or call us directly at 0611 17 207 0.

We can help you find the right lawyer!
No matter what kind of business you’re in, you’ll receive expert advice and legal consultation.

The information published on our site is all written and checked by experts with the greatest care. Nevertheless, we cannot guarantee the accuracy of this information, as laws and regulations are subject to constant change. Therefore, always consult an expert in a specific case – we would be happy to connect you with the right professional.

firma.de assumes no liability for damages caused by errors in the texts.