Contrary to what most people think, in Germany a ‘Holding’ is not a legal company form, but an organisation of multiple companies with at least two hierarchical levels.

Got questions about setting up a business in Germany?

Hi, I’m Andreas and I’ve been advising businesses in Germany for over a decade. I’d be happy to call you and answer any questions you have in a one-on-one consultation.

What is a Holding?

Although colloquially known as a Holding in Germany, it’s full term is a Holding-Struktur (holding structure or holding company).

This is the simplest form of a holding structure is a superordinated company or parent company that holds stock in a dependent subsidiary company.

There are countless ways to organise a Holding. The usual purpose of a holding structure is to organise multiple business divisions or corporate units so that they may act independently as legal persons that are still subject to central management. The holding structure serves as a way to facilitate these mutual dependencies.

Distinguishing a Holding from a Konzern and a Joint Venture

Although one is often confused for the other, Holding and the German Konzern (conglomerate) are not the same, though many of their characteristics do overlap.

The German Stock Corporation Act (Aktiengesetz) provides the definition of a Konzern but there is no legal definition for a Holding. One additional characteristic is the uniform management that distinguishes a Konzern and is prescribed by law. The most significant trait shared by both terms is the organisational and contractual interlinking of at least two independent companies.

In a nutshell: Every Konzern with at least one dependent subsidiary is a Holding, but not every Holding is a Konzern.

There is also a clear distinction between a Holding and a Joint Venture. The management and oversight of a joint venture is distributed among multiple cooperating partner companies. The legal basis for the relationship is contractual – it is not based on mutual shareholding.

Components of a Holding

Read more about subsidiaries and their legal characteristics here.

Most individual companies in a holding structure are corporations that limit the companies’ liabilities to their corporate assets. Once as the parent company has been formed, the formation of the subsidiaries can follow.

The parent company becomes a shareholder and holds up to 100% of the subsidiary.

Forming a holding structure generally takes longer than usual company formations, as at least two companies must be formed, one after the other.

Choosing a company name that includes the designation ‘Holding’ can be problematic, as many registry courts reject such designations if it is not clear enough that you are actually planning to form a holding structure. This is because the term can be misleading in terms of the company’s size and influence.

Terms such as ‘Ventures’ or ‘Investments’ are common elements of parent company names and are usually rejected by registry courts.

To stay on the safe side, you can have the company names of the parent company and subsidiary checked by the IHK  which can then recognise the connection between the two and evaluate any ‘iffy’ terms from that perspective. If the IHK approves your desired company names, you’ll have a good chance of approval by your relevant registry court as well.

Don’t get lost in the bureaucratic jungle.
Get a Holding package and let us show you the way.

There are several popular ways in which businesses organise holding structures. Hybrid forms are also common among larger organisations. We’ve put together a short overview of the basic holding structure models here:

Practical examples of Holding structures: How do these models apply?

It can sometimes be difficult to understand the theory behind holding structures and the advantages they offer small and medium-sized companies. firma.de has put together a few practical examples to better illustrate this.

Young, fast-growing businesses often reverse the typical holding structure model: Each founder first forms their own parent company as a sole shareholder. A joint subsidiary is then formed, and the parent companies share its ownership equally.

Four founders want to start a blockchain business while continuing to pursue their own individual projects. Founders A, B, C and D each form a limited-liability UG: aaa UG, bbb UG, ccc UG and ddd UG. As soon as every UG is entered into the commercial register, the founders form a joint subsidiary: BChain GmbH. Each UG owns 25% of BChain, giving each founder the same voting power. 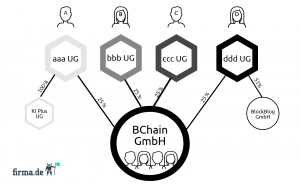 Founder A now decides to form another subsidiary, KI Plus UG, to further develop his artificial intelligence business ideas. aaa UG holds 100% of KI Plus. At the same time, Founder D forms an online fintech platform based in France and names it BlockBlog GmbH. Her parent company ddd UG holds 51% of BlockBlog.

Why does it make sense to organise the Holding this way? Structures like this provide security in case the joint company’s operations come to an end. Even if Bchain is dissolved or one of the parent UGs backs out, the subsidiaries KI Plus and BlockBlog would remain completely unaffected, as they were formed in a separate holding structure.

Risk distribution in a Holding

Should any highly lucrative contracts fall through, the losses would not endanger the liquidity of the other subsidiaries or of the entire holding system. The vehicle fleet subsidiary’s assets, for example, would not be at risk, and the company would survive another subsidiary’s insolvency.

Without a holding structure, the construction company as a whole would be fully liable in the case of insolvency. A liability claim would affect all company assets, including the vehicle fleet and its operating facilities. It would be impossible for individual parts of the company to survive insolvency.

Let’s say you have a business idea that involves high investment risk. A holding structure would be an option to separate high-risk business divisions. Say you create a subsidiary from an existing IT company. The new startup develops the latest software with venture capital. The parent company invests in the necessary equipment for the new company and provides the necessary commercial space. If the startup fails, the equipment and facilities can be extracted from the subsidiary.

Advantages of a Holding

It’s up to you to assess how advantageous a holding structure would be for your business model. Make sure to consider the additional costs and effort involved with company formation, accounting, tax consulting, etc. A Holding typically offers the following advantages:

Want to weigh up whether the Holding is the right way to organise your business? Read our Holding pros and cons here.

Can I use a Holding for asset management purposes?

Yes, asset management holding structures are possible and are becoming more and more popular. Subsidiaries’ revenue can be transferred to the parent company with minimal tax losses.

How are Holding companies taxed?

There is no general answer to this question, as there are many factors that play a role in holding company taxation, such as legal company form, business activity and organisational structure.

Can I create a holding structure ‘after the fact’?

The company shares of the previous shareholders must then be split or sold. The holding structure becomes official once the changes to the subsidiary’s contract have been notarised and submitted to the Handelsregister.

A parent company must hold at least 15% of a subsidiary to be exempt from trade tax.

Can an Aktiengesellschaft (stock corporation) be subsidiaries in a Holding?

Yes. Such a holding structure model is common among large companies and corporations. This does complicate the structure, as it subjects the subsidiaries to the strict regulations of the German Stock Corporation Act.

Want to figure out if a Holding is right for you?
Arrange a free initial consultation with our experts and let us advise you on your options.

As the parent company, how can a UG provide the seed capital needed to form a subsidiary?

A UG can provide the subsidiary with seed capital in the form of a private loan.

Who is liable in a Holding?

The more companies interlinked across different levels of hierarchy (such as the presence of sub-subsidiaries, for example), the more complex the legal situation naturally becomes. There are exceptions to this rule for subsidiaries that are Aktiengesellschaft (AG) or partnerships limited by shares (Kommanditgesellschaft auf Aktien).

Got questions about setting up a business in Germany?

Hi, I’m Andreas and I’ve been advising businesses in Germany for over a decade. I’d be happy to call you and answer any questions you have in a one-on-one consultation.